<
>
The Curly Coated Retriever
The Flatcoated Retriever
The Flat-Coated Retriever is a gundog breed originating from the United Kingdom. It was developed as a retriever both on land and in the water.  The Flat-Coated Retriever breed standard calls for males to be 23–24.5 inches (58–62 cm) tall at the withers and for females to be 22–23.5 inches (56–60 cm), with a recommended weight of 45–75 lb (24–34 kg).  ​Flat-Coated Retrievers have strong muscular jaws and a relatively long muzzle to allow for the carrying of birds and upland game. Their head is unique to the breed and is described as being "of one piece" with a minimal stop and a backskull of approximately the same length as the muzzle.  They have almond shaped dark brown eyes that have an intelligent, friendly expression. The ears are pendant, relatively small and lie close to the head.  The occiput (the bone at the back of the skull) is not to be accentuated (as it is in setters, for example) with the head flowing smoothly into a well-arched neck.  The topline is strong and straight with a well feathered tail of moderate length held straight off the back. Flat-coats should be well angulated front and rear, allowing for open, effortless movement. They are lighter, racier and more elegant in appearance than the other retriever breeds.
The Nova Scotia Duck Tolling Retriever
The Nova Scotia Duck Tolling Retriever, or Toller for short, is a medium-sized breed of gundog bred primarily for hunting. It is the smallest of the retrievers, and is often mistaken for a small Golden Retriever. Tollers are known to be intelligent, alert, high-energy dogs. Tollers get their name because of their ability to lure waterfowl within gunshot range. The breed originated in southwestern Nova Scotia, Canada, where they were used for tolling and retrieving ducks.  Tollers are named for their ability to entice or lure waterfowl within gunshot range, called "tolling". The hunter stays hidden in a blind and sends the dog out to romp and play near the water, usually by tossing a ball or stick to be retrieved. The dog's appearance is similar to that of a fox. Its unusual activity and white markings pique the curiosity of ducks and geese, who swim over to investigate.  When the birds are close, the hunter calls the dog back to the blind, then rises, putting the birds to flight, allowing him a shot. The Toller then retrieves any downed birds. They are particularly suited for retrieving in cold water climates because of their water-repellent double coat.

The breed was developed in the community of Little River Harbour in Yarmouth County, Nova Scotia, around the beginning of the 19th century to toll waterfowl.The breed was originally known as the Little River Duck Dog or the Yarmouth Toller. Its exact origins are not known but it appears that some possibly spaniel and setter-type dogs, retriever-type dogs, and farm collie may have gone into the mix. It may share origins with the smaller Kooikerhondje, which has a similar method of work.  The Toller was officially admitted to the Canadian Kennel Club in 1945.Declared the provincial dog of Nova Scotia in 1955, the breed gained national recognition in 1980, when two Nova Scotia Duck Tolling Retrievers were awarded Best in Show at championship events that included many breeds.On June 11, 2001, it was approved for admission into the Miscellaneous Class of the American Kennel Club and was granted full recognition ihttp://en.wikipedia.org/wiki/American_Kennel_Clu bnto the Sporting Group on July 1, 2003.
The Chesapeake Bay Retriever
The Chesapeake Bay Retriever is a breed of dog belonging to the Retriever, Gundog, and Sporting breed groups. Members of the breed may also be referred to as a Chessie, CBR, or Chesapeake. The breed was developed in the United States Chesapeake Bay area during the 19th century.  Historically used by area market hunters to retrieve waterfowl, it is primarily a family pet and hunting companion. They are often known for their love of water and their ability to hunt. It is a medium to large sized dog similar in appearance to the Labrador Retriever.  ​The Chesapeake have a wavy coat, rather than the Labrador's smooth coat. They are described as having a bright and happy disposition, courage, willingness to work, alertness, intelligence, and love of water as some of their characteristics. 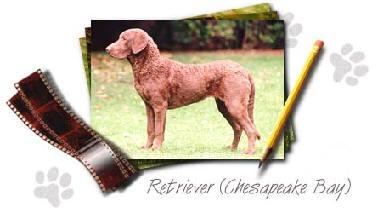 The Golden Retriever
The Golden Retriever is a large-sized breed of dog. They were bred as gun dogs to retrieve shot waterfowl such as ducks and upland game birds during hunting and shooting parties,and were named retriever because of their ability to retrieve shot game undamaged. Golden Retrievers have an instinctive love of water, and are easy to train to basic or advanced obedience standards. They are a long-coated breed, with a dense inner coat that provides them with adequate warmth in the outdoors, and an outer coat that lies flat against their bodies and repels water. Golden Retrievers are well suited to residency in suburban or country environments. Although they need substantial outdoor exercise, they should be housed in a fenced area because of their instinctual tendency to roam.The dog sheds copiously, particularly at the change of seasons, and requires fairly regular grooming.

The breed is a prominent participant in conformation shows for purebred dogs. The Golden Retrievers' intelligence makes it a versatile breed and allows it to fill a variety of roles – common ones being guide dog for the blind, hearing dog for the deaf, hunting dog, detection dog, and search and rescue participant. The breed's friendly, gentle temperament means it is unsuited to being a professional guard dog, but its temperament has also made it the third most popular family dog breed (by registration) in the United States,the fifth most popular in Australia and the eighth most popular in the United Kingdom. Golden Retrievers are rarely choosy eaters, but require ample exercise (of two or more hours a day).The breed is fond of play but also highly trainable.
The Labrador Retriever
The Labrador Retriever originates from the US and comes in three different colours - Yellow, Black and Chocolate.

The foundational breed of what is now the Labrador Retriever was known as the St. John's water dog, St. John's Dog, or Lesser Newfoundland. When the dogs were later brought to England, they were named after the geographic area known as "the Labrador" (they were known as Labrador Retrievers because they "retrieved" in the Labrador Sea) or simply Labrador to distinguish them from the larger Newfoundland breed, even though the breed was from the more southern Avalon Peninsula. The Labrador retriever is actually from Newfoundland; exceptionally, the Newfoundland (dog) was created near the same time in Labrador. The two breeds' names and origins were mixed once moved into England and the Americas. The dog from Labrador became the large, long furred dog we see and know today, and the dog from Newfoundland became the Labrador.  The Labrador Retriever, also known as simply Labrador or Lab, is one of several kinds of retrievers, a type of gun dog. They are even-tempered and well-behaved around young children and the elderly. Labradors are athletic, playful, and the most popular breed of dog by registered ownership in Australia, Canada, New Zealand,the United Kingdom,and the United States (since 1991).  A favourite assistance dog breed in these and other countries, Labradors are frequently trained to aid people who are blind and people with autism, act as therapy dogs, and perform screening and detection work for law enforcement and other official agencies. They are prized as sporting and waterfowl hunting dogs.  A few kennels breeding these grew up in England; at the same time a combination of sheep protection policy (Newfoundland) and rabies quarantine (England) led to their gradual demise in their country of origin.  The first and second Earls of Malmesbury, who bred for duck shooting on his estate, and the 5th and 6th Dukes of Buccleuch, and youngest son Lord George William Montagu-Douglas-Scott, were instrumental in developing and establishing the modern Labrador breed in 19th century England. The dogs Avon ("Buccleuch Avon") and Ned given by Malmesbury to assist the Duke of Buccleuch's breeding program in the 1880s are considered the ancestors of modern Labradors.

The first St. John's dog was said to be brought to England in or around 1820; however, the breed's reputation had spread to England long before. There is a story that the Earl of Malmesbury saw a St. John's Dog on a fishing boat and immediately made arrangements with traders to have some of these dogs exported to England. These ancestors of the first labradors so impressed the Earl with their skill and ability for retrieving anything within the water and on shore that he devoted his entire kennel to developing and stabilizing the breed.

Yellow (and similar shades)In the early years of the breed through to the mid-20th century, Labradors of a shade we would now call "yellow" were in fact a dark, almost butterscotch, colour (visible in early yellow Labrador photographs). The shade was known as "Golden" until required to be changed by the UK Kennel Club, on the grounds that "Gold" was not actually a colour. Over the 20th century a preference for far lighter shades of yellow through to cream prevailed, until today most yellow Labradors are of this shade. Also fawn has been a common colour in the yellow lab variety.  Interest in the darker shades of gold and fox red were re-established by English breeders in the 1980s, and three dogs were instrumental in this change: Balrion King Frost (black, born c. 1976) who consistently sired "very dark yellow" offspring and is credited as having "the biggest influence in the re-development of the fox red shade",[13] and his great-grandson, the likewise famous Wynfaul Tabasco (b. 1986),[14] described as "the father of the modern fox red Labrador", and the only modern fox red Show Champion in the UK. Other dogs, such as Red Alert and Scrimshaw Placido Flamingo, are also credited with passing on the genes into more than one renowned bloodline.

Chocolate and Black Labradors
Jack Vanderwyk traces the origins of all chocolate Labradors listed on the LabradorNet database (some 34,000 Labrador dogs of all shades) to eight original bloodlines. However, the shade was not seen as a distinct colour until the 20th century; before then according to Vanderwyk, such dogs can be traced but were not registered. A degree of crossbreeding with Flatcoat or Chesapeake Bay retrievers was also documented in the early 20th century, prior to recognition. Chocolate Labradors were also well established in the early 20th century at the kennels of the Earl of Feversham, and Lady Ward of Chiltonfoliat.  The bloodlines as traced by Vanderwyk each lead back to three black Labradors in the 1880s—Buccleuch Avon (m), and his sire and dam, Malmesbury Tramp (m), and Malmesbury June (f). Morningtown Tobla is also named as an important intermediary, and according to the studbook of Buccleuch Kennels, the chocolates in this kennel came through FTW Peter of Faskally (1908).