Information about The Golden Retriever

Below is more information about the Golden Retriever Breed, Acceptable Breeding Practices and how to go about selecting a Breeder. Please navigate through the tabs as required.
<
> 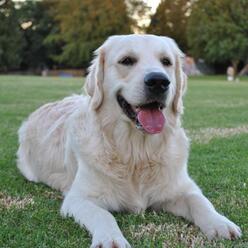 The Golden is a medium-to-large size dog who requires a good bit of space indoors and out.  Everything about the dog is big, including his hairy paws, which will track mud and dirt onto your floor.  His happy wagging tail will sweep your prized glassware from low-standing table tops.  His natural curiosity will lead to rows of nose prints on the glass above your windowsills.  Given a single opportunity, he will claim at least two couch cushions or your easy chair.  The youngest and most beautiful of the retriever breeds, the Golden Retriever was originally developed as a waterfowl dog.  Although still an admirable shooting dog, the Golden today spends more time romping with the family than in the duck blind or the field.  Often considered the ideal dog to hunt over, compete with or just live with and hug a lot, the Golden has something to offer the sportsman, dog fancier or professional dog lover.
Remember that your cute, fluffy puppy will grow into a large vigorous dog, who will need looking after for up to 15 years.  Like a child, it  depends on you to provide its nutrition, education and overall well-being.  Consider the  amount of time you can dedicate to your dog, the space available in your home,  the cost of veterinary attention and most importantly, your dog’s essential food  requirements – Goldens are among the dog world’s greatest eaters!

History of the Breed

In all purebred canines, a "Breed Standard" has been adopted by various kennel clubs in the world.  In South Africa, the Kennel Union of South Africa (KUSA) has a specific breed standard for the Golden Retriever.  Please visit their website on www.kusa.co.za for more information, or alternatively  contact us for more information.  It is true that many countries has different  breed standards for the same type of dog - for example the American breed  standard for the Golden Retriever differs from the South African or United  Kingdom.   It is a good idea to familiarise yourself with the breed standard to  be able to ascertain whether you are purchasing a purebred Golden  Retriever if  you are not familiar with the breed.

The world's friendliest dog, the Golden Retriever is also counted amongst the most talented and popular of companion dogs.  Renowned for its lustrous golden coat, his buoyant personality and his lusty desire to hunt, the Golden Retriever makes an ideal pet dog for young and old alike.  His winning ways and easy-to-train temperament account for his great popularity and success in every field.

Information about Breeding and Breeding Practices

<
>
Goldens, like most large breed dogs, are predisposed to Hip and Elbow Dysplasia.  There are 3 roll players in this disease; Genetics, Environment and Nutrition.

To minimise the risk of producing puppies with Hip Dysplasia, reputable breeders have their breeding stock's hips and elbows X-rayed once they reach adulthood (at 12 - 18 months of age).  These X-rays are examined and scored by a radiologist.  Only dogs with acceptable scores are then bred from.  Unfortunately there is room for error as this is not a genetic test but merely states that the specific dog is free from radiographical changes.  This does not mean that the dog is genetically free from Hip or Elbow Dysplasia merely that the dog shows no sign of the disease.  At this stage there is no genetic test available for Hip or Elbow Dysplasia.

Genetic diseases affect many canine breeds. To date, there is no cure for any canine genetic diseases. Consequently, affected canines may experience painful, distressed and often shortened lifespans. The genetic tests on offer at inqaba biotec™ are able to determine whether your canine family member is clear of a disease, is a carrier for the disease or is affected by the disease.​
Below information is from Inqaba Biotec website directly:  ​https://www.inqababiotec.co.za/service/animal-genetics/
​The Animal Genetics Department at Inqaba Biotechnical Industries (Pty) Ltd provides a myriad of accurate genetic tests (health, colour, DNA fingerprinting) to the domestic, livestock and wildlife industries.
Mochavulin Golden Retrievers pride ourselves that we were the first Golden Retriever breeders to start with DNA testing and others have slowly followed our example.  With more tests becoming available, we will continue to DNA test our dogs to get the most information and best information possible when we decide to breed our dogs.  We will not breed with affected dogs.
Tests currently relevant for Golden Retrievers:

Nutrition is the other and most controllable variable in this equation.  With a large  breed dog one has to prevent the puppy from growing too fast and this can be  done through nutrition.  We feed Hill's Science Plan Large Breed Puppy, Eukanuba, Royal Canin, Origin or Acana to our puppies and insist that our owners do the same.  One of the most detrimental factors  for Hip Dysplasia is an overweight puppy or dog.  It has been proved that dogs  that are overweight are 50% more likely to develop Hip Dysplasia than their littermates at ideal weight.

Environment and how the puppy is raised plays a hugely important part in whether a puppy will develop Hip and Elbow Dysplasia or not.  Jumping over obstacles, in and out of cars, slipping on floors, over-exercising can all lead to a puppy developing these problems.  It is therefore essential that you are cautious with a puppy's activities until it is at least 12 months old.  If your puppy has an accident at this stage (like falling off something) they probably will develop a joint problem.  On the other hand, Hip Dysplasia is by no means a death sentence and most Goldens with this problem cope extremely well into old age.  In this day and age there are also many ways of maintaining a dog with joint problems, such as nutrition.

Goldens, once again like many other breeds, are predisposed to many eye diseases as  well.  To avoid producing puppies with problems, reputable breeders have their  breeding stock screened annually.  Once again, these certificates only state  that the dog in contention does not have the disease/s at the time of the  screening.  Unfortunately there are as yet no genetic tests available for eye  diseases in Golden Retrievers (some other breeds such as Labrador Retrievers,  have DNA tests available for some of the eye diseases.  Although these  certificates cannot assure one of never producing an affected puppy, at least by  testing, reputable breeders are not breeding with affected dogs and therefore minimising the risk of producing affected puppies.

Why is Showing or getting a Title for your dog important?

Not just a brag, not just a stepping stone to a higher title, not just an adjunct to competitive scores, a title is a tribute to the dog that bears it, a way to honor the dog, an ultimate memorial. It will remain in record and in memory for as long as anything in this world can remain. Few humans will do as well or better in that regard.
And though the dog itself doesn't know or care that its achievements have been noted, a title says many things in the world of humans, where such things count.
A title says your dog was intelligent and adaptable, and good-natured. It says that your dog loved you enough to do the things that please you, however crazy they may have sometimes seemed.
And a title says that you loved your dog, that you loved to spend time with it because it was a good dog, that you believed in it enough to give it yet another chance when it failed, and that, in the end, your faith was justified.
A title proves that your dog inspired you to that special relationship enjoyed by so few; that in a world of disposable creatures, this dog with a title was greatly loved, and loved greatly in return.
And when that dear short life is over, the title remains as a memorial of the finest kind, the best you can give to a deserving friend, volumes of pride in one small set of initials after the name.
​A title earned is nothing less than love and respect, given and received, and permanently recorded.
​What is a Registered, Pedigreed Dog?
The term REGISTERED or PEDIGREED has different interpretations for different people.  Some people misuse the term registered to confuse and manipulate prospective puppy owners.  There is only ONE way to purchase a puppy and its the RIGHT way.  Here are some important facts to take into consideration when you are thinking about acquiring a pet for your household:

Firstly you need to decide if you have the budget to purchase a well bred dog.  Not everyone has the money to pay the full puppy price that breeders are asking for.  There is a good reason we ask the prices we ask - you can read more about this on the Puppies page under the "Puppy Price Debate".  The answer to this, I feel is simple....if you don't have the money to buy a pet that is properly bred, then you have only two choices:  (a) SAVE the money  (b) DON'T buy a pet  (c) ADOPT from a shelter. 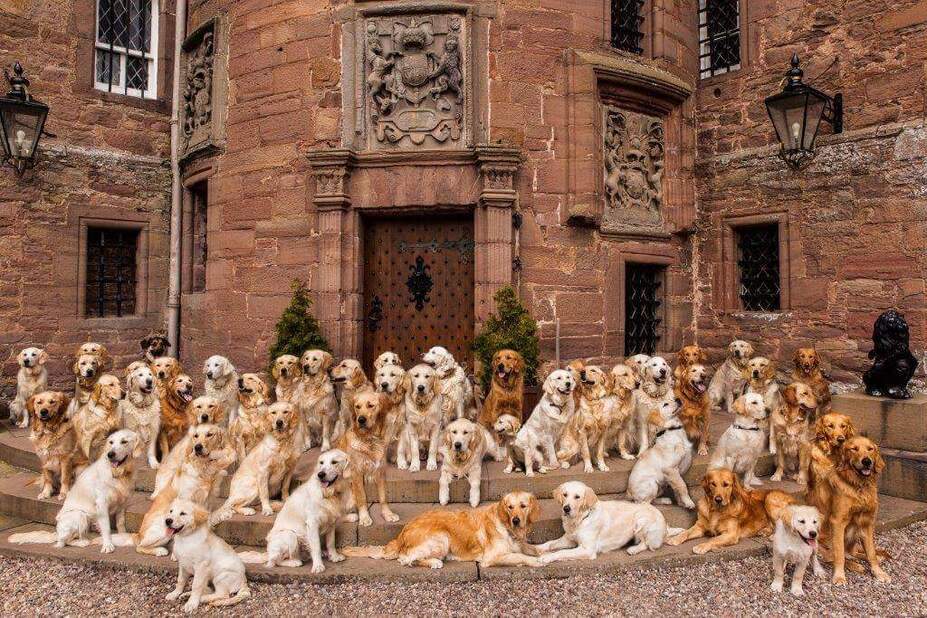